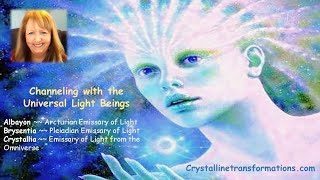 Brysentia began talking during this channel. She spoke of the original Reptilians as what we called the Diansours. She spoke of how the Pleiadians have always supported the earth and how they went into the Earth or into a higher dimension during the time of Atlantis and now they are returning. She answered many questions from people. She also spoke of the many more planets that will come into awareness as we travel to space in the future.

Albayon spoke next about what is happening. He said many, many changes have taken place and how the rest is falling into place. He spoke of the continued dual timelines and how that will become more and more evident.

Lastly, Crystallia spoke of love and the intention for people to remain in this higher consciousness. She also spoke about, actually, all of them have spoken about the fact that this is a spiritual awakening. I could feel the love, the balance, the compassion that moved through her as she spoke.